Aimed squarely at the all-conquering Ford EcoSport, the new Maruti Vitara Brezza is a similarly sized model that aims to help its manufacturer establish a strong foothold in the Small SUV market. The Brezza has been tailor-made for the Indian SUV buying lot and the initial response from the target audience has been very positive. The Vitara Brezza has gone on sale at a starting price of INR 6.99 Lakhs and is available only with a Diesel engine. Car Blog India recently got to get behind the wheel of a fully-loaded ZDI+-spec Vitara Brezza and here are out drive impressions of the latest kid on the block. Read on for our detailed Maruti Vitara Brezza Test Drive Review. 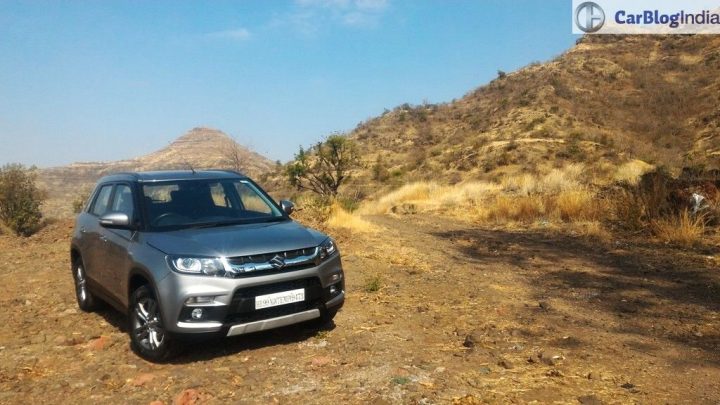 Where have I seen it before?

The Vitara Brezza takes many design cues from the Suzuki iV4 and XA-Alpha concepts that were seen at the earlier editions of the Delhi Auto Expo. The designers at Maruti Suzuki have done a great job of infusing the aggressive stance of a true blue SUV with small dimensions. The Vitara Brezza is aesthetically pleasing and its design is likely to have a wide appeal. The front-end is characterized by a chunky-looking bumper that sports a huge air dam, blacked-out fog lamp enclosures, and a faux scuff plate that enhances the rugged appeal. Other highlights here include a fashionably-styled radiator grille, a rather sleek pair of headlamps and LED DRLs.

Flared wheel arches, two-tone color theme, a thick C-pillar and wrap-around taillamps result in an attractive side profile. The sides get a neat shoulder line that runs between the front fenders and taillamps. And then, there’s a tapering greenhouse that makes the design more dynamic. The pillars come finished in black to lend a ‘floating roof’ effect and all this ensures that Brezza catches your fancy without being too flamboyant. 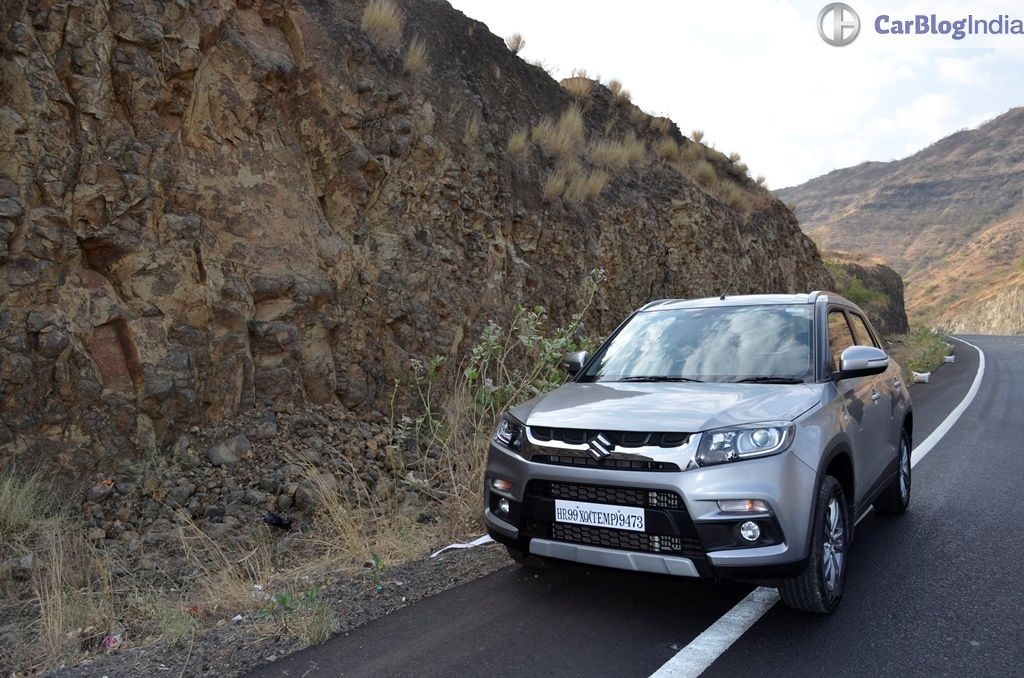 There’s nothing much to write about the rear, but the clean surfaces, along with bits such as the scuff plate, two-part taillamps and ‘Vitara Brezza’ embossing on the chrome applique ensure that the Brezza looks sufficiently pleasing. As we said, the Brezza’s design doesn’t break new grounds, but at the same time, its pleasing and inoffensive looks are very likely to attract buyers across age groups. To further spice up the things, Maruti is also offering three styling packages (Named – Glamour, Sporty and Urban) that comprise of accessories to personalize the new SUV. 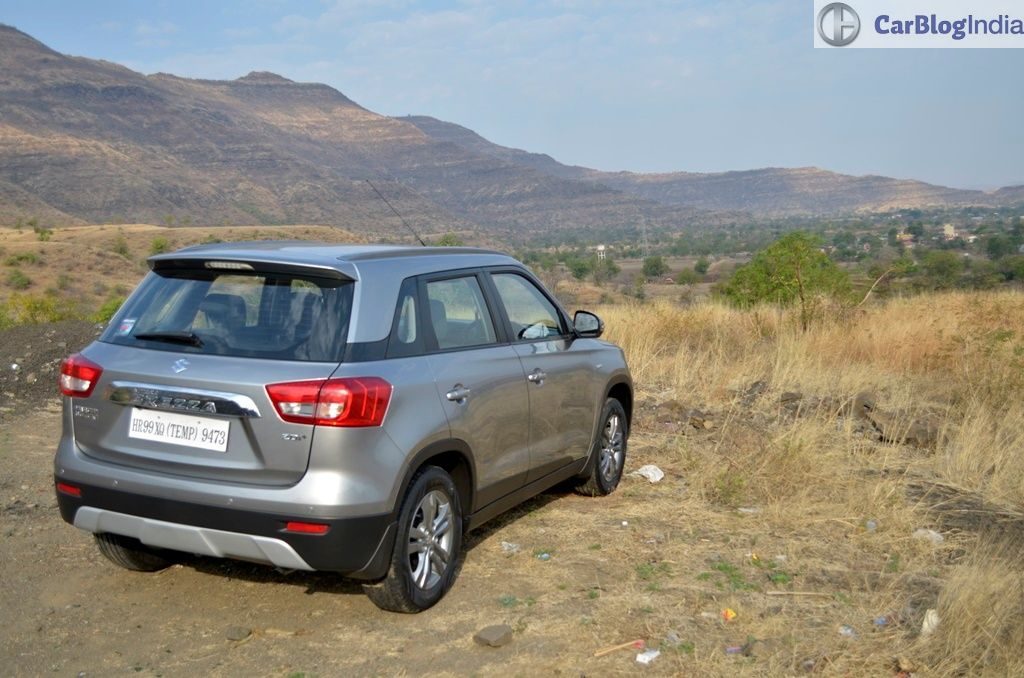 But is it spacious enough?

While we don’t recommend you to have very high expectations from the cabin of a sub-4 metre SUV, prospective buyers will be only pleased to know that the Brezza gets an adequately spacious and a practical interior setup. There’s enough space to carry three occupants at the rear and the passengers will appreciate the comfortable seats, high levels of headroom and decent leg space. What they won’t appreciate, however, is the slight lack of under-thigh support and the fact that the front seats, though comfortable, are a bit thin which means you can feel the rear passenger’s knees digging into the backrest. The Brezza gets 328-litres of boot space, which can be further extended by folding down the rear seats. And then, there are bits like the low loading lip, 60:40 split for rear seats, several cubby holes and a coat hook. Adding some zing are the glossy black plastics, brushed metal highlights and an instrument console that allows you to select its back-light colours. Quality levels and the overall fit and finish of the material used is right up there with the best.

The Maruti Vitara Brezza is a fairly feature-laden car that gets a driver-side airbag as a standard fitment even on the lower variants. Also, buyers of the entry-level trims can opt for a safety package that brings in the passenger-side airbag and anti-lock braking system. Here are the highlights of the fully loaded Brezza’s features list –

The Vitara Brezza is ergonomically very well sorted with the gear lever, indicator stalks all falling perfectly into the driver’s hands and it is very easy to find a comfortable driving position. There are few flaws, though. It is tough to find a good adjustment for the rear headrest. Quite like what we experienced on the Maruti S-Cross.

What’s under the hood?

Like we said, the Vitara Brezza has gone on sale with just one engine option – the internationally acclaimed Fiat-sourced 1.3-litre VGT motor that gets the DDiS200 moniker from Maruti Suzuki. This engine has a max. power-torque of 89 bhp-200 Nm and is the same unit that also powers the S-Cross and the Ciaz. The Brezza comes with a five-speed manual transmission but the launch of an AMT-equipped version shouldn’t be too far in the offing. While it is too early to speculate on the launch date of the petrol model, a Petrol model too should see the light of the day in near future. 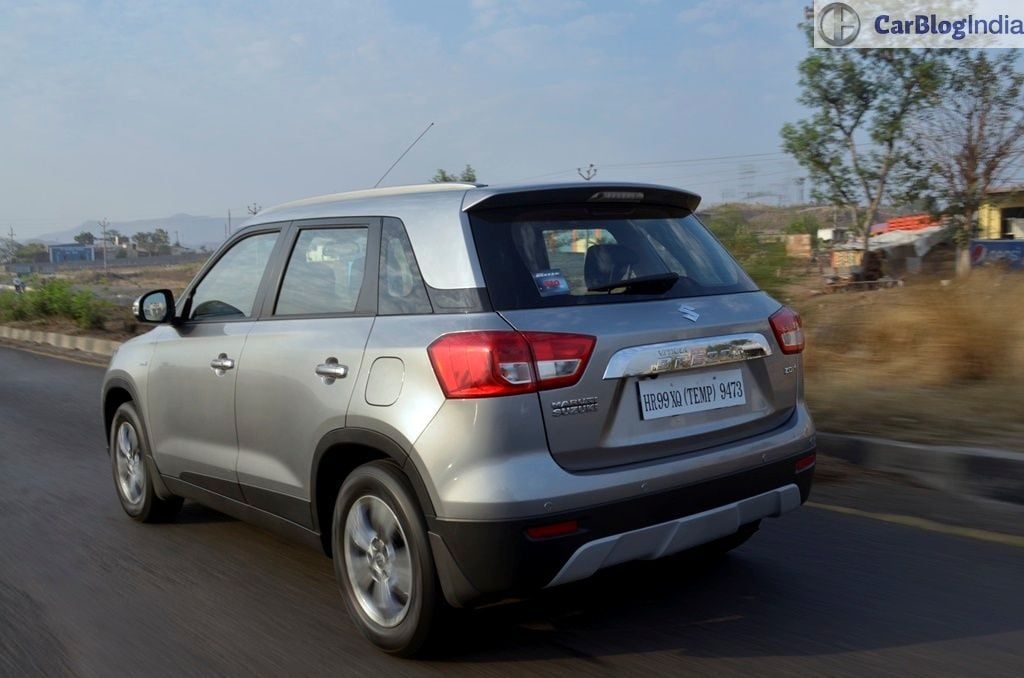 The Brezza’s 1.3-litre Turbo’ed rev friendly oil burner impresses us with decent performance and a highly frugal nature. Talking about the fuel mileage, the Vitara Brezza, which gets an ARAI-certified fuel mileage of 24.3 km/l, becomes the most fuel efficient SUV in the country. Even the performance numbers don’t leave much to complain of. True, specs suggest that the Brezza isn’t as powerful as the 2016 EcoSport. Real world performance, however, puts the Brezza at par with all of its rivals. Well-spaced out gears and a strong mid-range engine performance ensures that this compact SUV feels sufficiently powerful. However, the turbo lag below 2000 rpm is definitely noticeable and the meat of the power comes post that number. Out on the highway, the Vitara Brezza goes on to accelerate effortlessly till speeds of around 150 km/h and can nicely trundle along at 100-120 km/h in fifth gear and around 2400-2900 rpm. However, overtaking would require a downshift or two in order to tackle the characteristic turbo lag below 2000 rpm of the Fiat sourced Multijet engine. Talking of the NVH levels, some of the of diesel engine clatter does find its way into the cabin, but only when the tacho needle approaches the redline. Some road noise also filters into the cabin and there is a noticeable amount of vibration filtering in through the gear lever, but in normal driving conditions, the Vitara Brezza’s refinement levels are acceptable.

During our drive, we took the Brezza over varying surfaces including smooth tarmac and the not-so-good patches of road. And we’re happy to report that this compact SUV offered a comfortable ride in all environments. The suspension setup is slightly on the stiffer side, which means that although it does feel a little harsh over rough surfaces, it ensures that the body roll is well contained, thereby inspiring confidence while cornering. However, thanks to the tall stance and the resulting high centre of gravity, body roll is still evident. The steering is not just visually similar to every other product from Maruti, but similar in terms of the feel as well. It is well weighed and strikes a decent balance between ease of use and intuitiveness. That, combined with the grippy 215-section Apollo tyres, ensures that this remains poised under high speed cornering. All in all, the Maruti Vitara Brezza offers a decent ride and a satisfying driving experience.

Okay, the Vitara Brezza isn’t the most flamboyant SUV available. Also, it isn’t as confident in the corners as the EcoSport. Even the power figures won’t make you go weak in the knees. But as an all-rounder, the Vitara Brezza makes a lot of sense. The new Maruti compact SUV looks modern, offers high passenger comfort and comes with a fuel efficient engine. The icing on the cake, however, is the attractive price tag. The Vitara Brezza, with a starting price of INR 6.99 lakhs (ex-New Delhi), is considerably cheaper than the entry-level Diesel-sipping Ford EcoSport. All this ensures that the Brezza makes for quite a compelling buy. 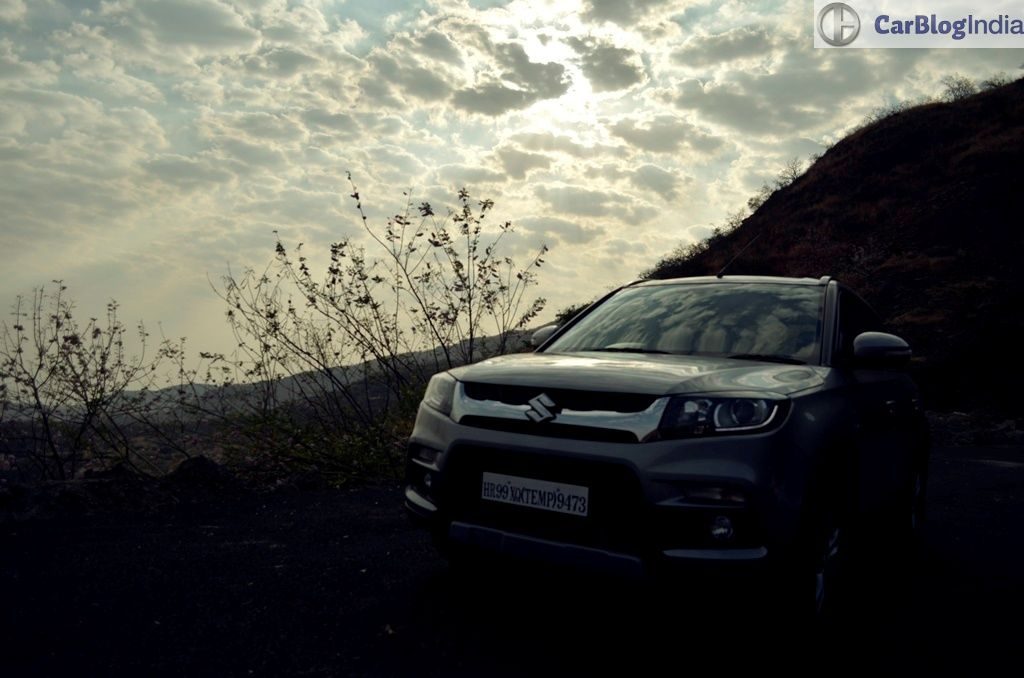