The Maruti Vitara Brezza was launched in March 2016. In the very month of its launch, the Vitara sold much more than the EcoSport. But sales figures are rarely a reflection of the capabilities of a product. Both these compact SUVs are competent. However, they are still quite different from each other. Here, we compare the two based on essential parameters such as specifications, price, and more. Find out more in our Maruti Vitara Brezza vs Ford EcoSport spec sheet comparison here- 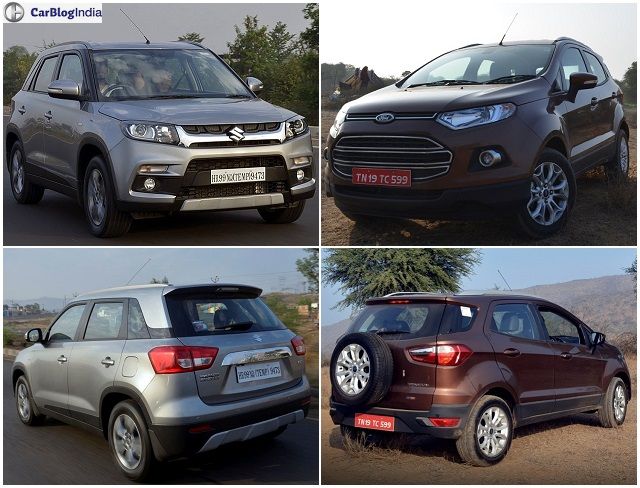 More often than not, it all comes down to the price at the end of the day. Maruti, as always, launched the Brezza with a very aggressive price tag that undercut the Ford EcoSport’s by a considerable margin. However, Ford reduced the price of the EcoSport by a considerable margin almost negating the Brezza’s advantage. The petrol powered Ford EcoSport is now cheaper than the Brezza and is priced between INR 6.76 and 9.69 lacs. 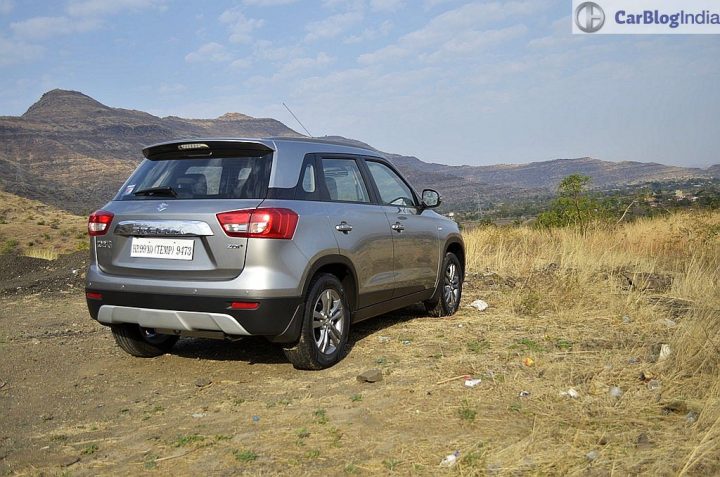 The EcoSport scores higher in terms of engine capacity and power output, but there isn’t much between the two in terms of torque figures. For now, the Vitara Brezza gets only a diesel engine with a 5 speed manual. Which means if it’s a petrol or automatic SUV you’re looking for then the EcoSport is your only option. However, the automatic transmission is only available with the 1.5 L petrol version of the EcoSport.

If we compare the two, the Brezza almost looks understated in front of the EcoSport’s in your face styling. However, it gets the quintessential design traits required to qualify it as an SUV – High set bonnet, body cladding on the bumper and wheel arches, short overhangs, and high ground clearance. The LED DRLs, floating roof, dual tone paint scheme add some flash to an otherwise understated design. The EcoSport boasts a more aggressive stance and a more striking exterior. Beefier wheel arches, tailgate mounted spare wheel make it a wee bit more SUV-like than the Vitara Brezza.

It’s pretty much the same story once you step inside these compact SUVs. Vitara Brezza’s understated elegance vs Ford EcoSport’s striking dashboard. Both SUVs get an all black interior. The Brezza’s is simpler in terms of design dominated by a centrally mounted SmartPlay touchscreen infotainment system. Its dials get mood lighting, something that adds a bit of oomph to the instrument console.

Ford India updated the EcoSport towards the end of 2015 and threw in a whole host of new features that make it one of the best cars in terms of equipment on offer. Vitara Brezza matches the EcoSport in terms of equipment with the top-spec ZDi+ trim offering features such as Auto headlamps, rain sensing wipers, electric folding ORVMs, etc. The EcoSport, however, does not get a touchscreen AVN, which the Vitara Brezza does. In terms of safety, the Vitara Brezza gets driver side Airbag and ABS as standard. However, unlike the EcoSport, you cannot opt for 6 airbags. Maruti has also tried to add a bit of jazz to the exteriors by offering a dual tone paint scheme and factory fitted body kits.

It is worth a mention here that the Ford EcoSport has a lot going for it. It has been in the market for a few years now and the last update did not bring about too many changes. But there’s no denying the fact that the Vitara Brezza, which becomes the first-ever sub-4m SUV from Maruti Suzuki, faces a really potent rival in the form of the Ford EcoSport. Here’s what we feel about the new 2016 Maruti Vitara Brezza vs Ford EcoSport comparison –