Visually, it’s the same little hatchback that is quickly becoming a common sight on India roads. But this one here comes with a bigger heart. Renault has swapped the 799cc engine of the standard Kwid for a bigger, more powerful 999cc mill. This move will, without a doubt, help strengthen the French manufacturer’s assault on the entry level hatchback segment. The Kwid 1.0 L is aimed directly at the likes of the Maruti Alto K10 and Hyundai Eon 1.0. The audience seems to love the Kwid’s design and the features it offers. A bigger engine will only help enhance its desirability. On paper, it seems like a sure shot recipe for success. But has it worked? We went to Chennai to sample the new variant and you can read all about it here in our Renault Kwid 1000cc test drive review. 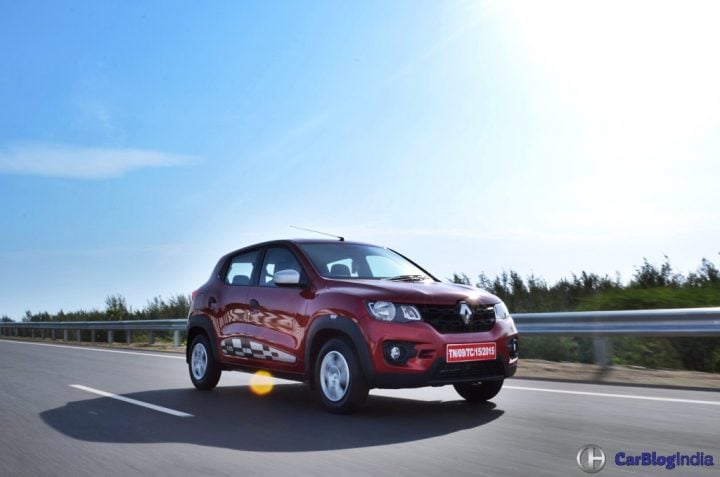 In terms of design, Renault hasn’t made any significant changes. The only visible changes include silver finish for the ORVMs and a chequered pattern on the side. The rest of the car continues with the same SUV-inspired exterior we’ve all come to like so much. Renault designers have taken certain essential SUV elements and incorporated them rather well into the design of an entry level hatchback. Bits like the high set bonnet, flared wheel arches and body cladding help set it apart from conventionally-styled rivals. Kwid 1.0 continues with the same 13 inch steel rims as the 0.8 L variant, but buyers can opt for alloy wheels that are available as an accessory at the dealer level. 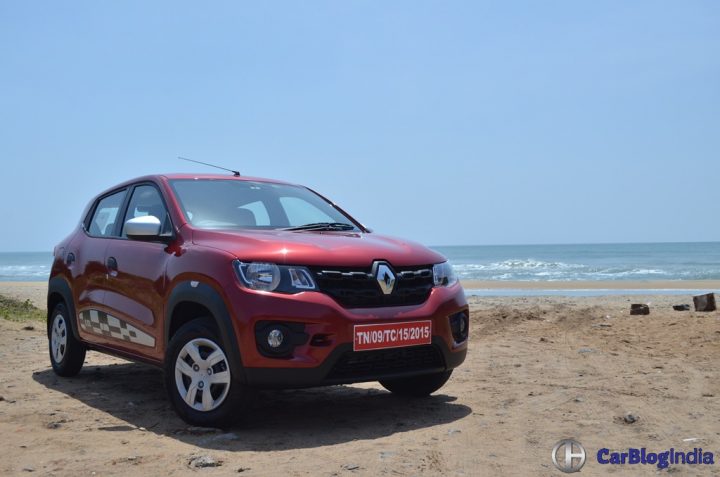 The rear-end is our favorite part of the design. The stylish wrap-around taillamps, a roof-mounted spoiler and a rugged rear bumper come together pretty well to bestow a typical-SUV look to the Kwid’s posterior. However, we do take issue with a few bits of the Kwid’s exterior. Firstly, the wheels continue with the 3-nut setup that means aftermarket alloys will be hard to come by. Secondly, slihglty fatter rubber would’ve worked wonders for the overall look of the car. Overall, we think most will agree when we say this is the most stylish car in its segment. 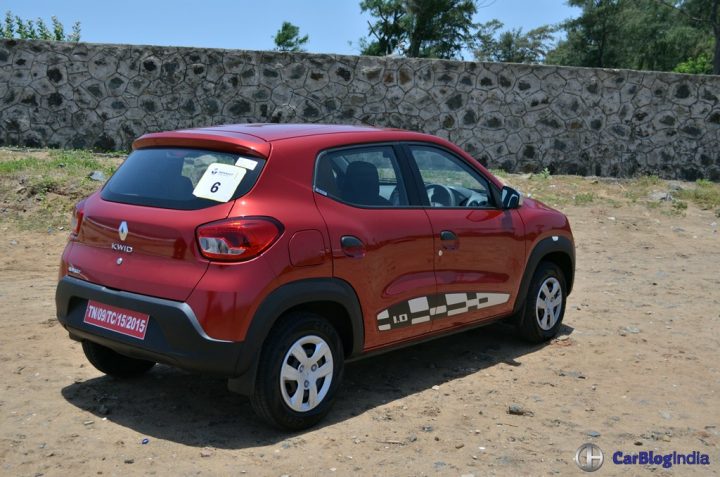 Even on the inside, the Kwid 1.0 continues with the same cabin as the existing car. It offers a stylish and a sufficiently premium cabin for an entry-level model. Space is one of Kwid’s strong points. There is ample room for two in the back seat and the 300 L boot can put cars costing twice as much to shame. It scores high on practicality with those twin gloveboxes and plenty of storage spaces all around. Bit like the touchscreen infotainment system and the digital speedo add to the overall premiumness of the cabin. Renault is offering the Kwid 1.0 only in the top pf the line RxT trim. So it comes with a healthy list of features. However, it still does without internal adjustment for the ORVMs and you get only a driver side airbag, which is also optional. 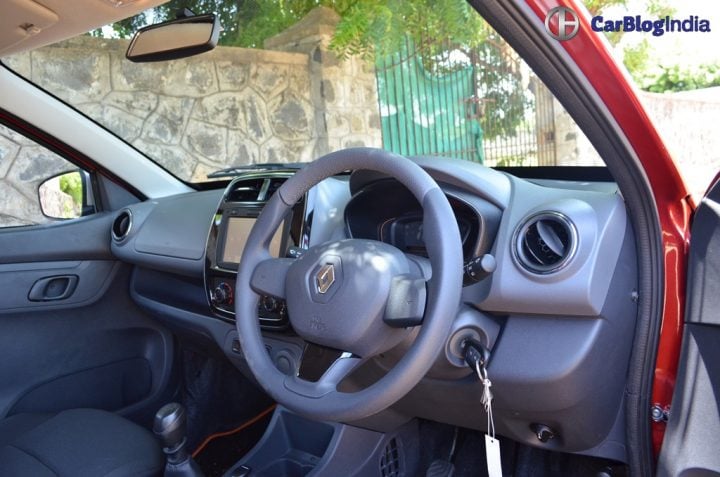 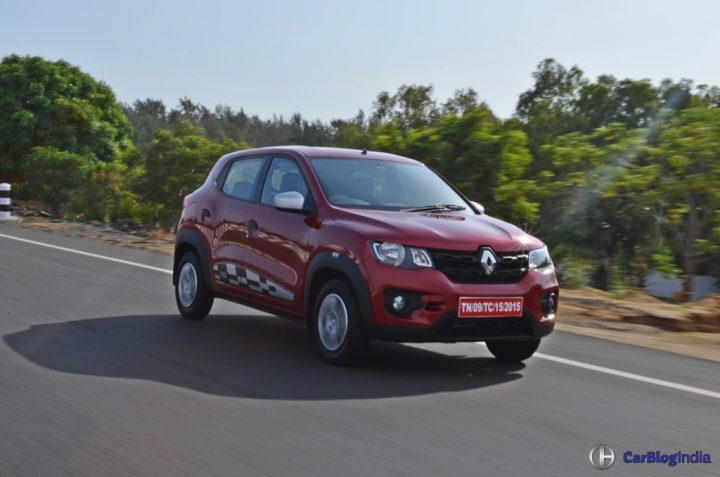 The increase in power output is instantly apparent. It gets off the line more eagerly and the Kwid 1.0 struggles a lot less while overtaking traffic. Thanks to increased power and torque, the Kwid feels much better out on the highways. High speed stability is surprisingly decent for a car as light as this one. As expected, fuel efficiency has taken a hit, but at a claimed 23.01 kpl, it is still very impressive. Buyers will have a wait a little bit longer for the automatic variants with the 5-speed AMT. Renault says it will reach showrooms only by the end of the year. 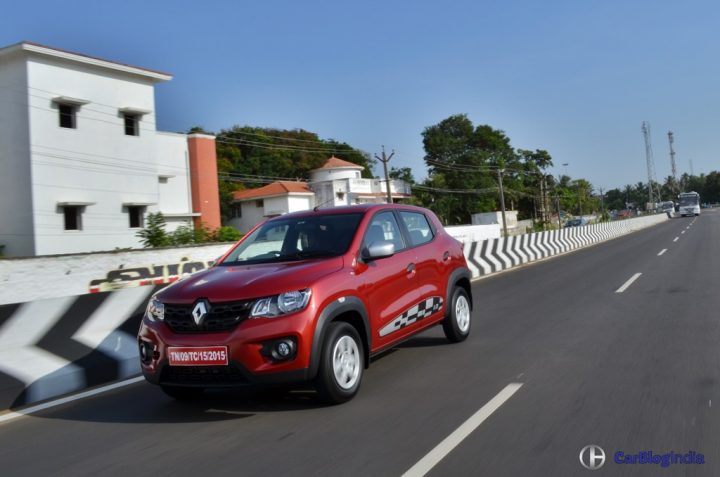 Engineers haven’t made any alterations to the mechanics apart from the addition of the new power unit. So, like its smaller hearted cousin, the Kwid 1.0 scores high in terms of ride quality. The rear passengers will appreciate the Kwid’s sufficiently soft suspension and aren’t likely to ever complain of a harsh ride. Its suspension absorbs most of the small irregularities with quite an ease. The Kwid feels just a wee bit jittery under hard braking. Apart from that, we have no qualms about the way this thing rides or handles. 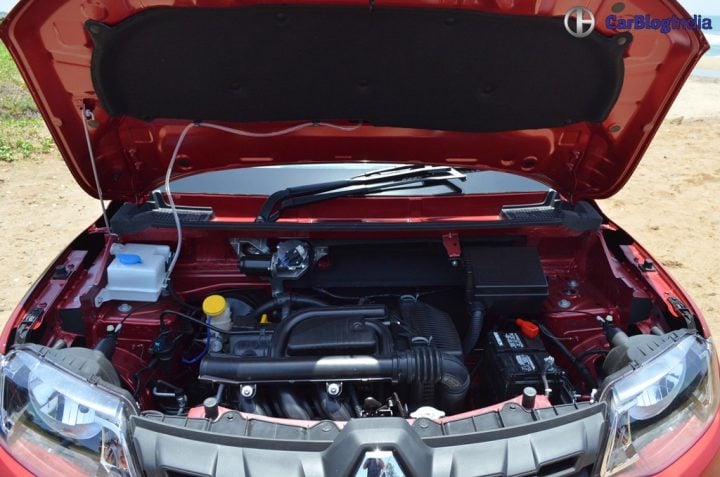 The Renault Kwid already had a lot going for it. It combination of SUV-ish look and a healthy list of features topped with great pricing has already helped the French car maker sell almost a lakh units in less than a year. With the addition of the 999cc engine, the Kwid now makes an even stronger case for itself in the entry-level hatchback segment. We were hoping to see a few more additions to the Kwid 1.0, especially in terms of safety features. But as far as this segment is concerned, the Renault Kwid 1.0 ticks all the right boxes. If you’ve always wanted a Kwid in your garage but were being held back by the small, underpowered engine, then the new Kwid 1.0 fits the bill perfectly. 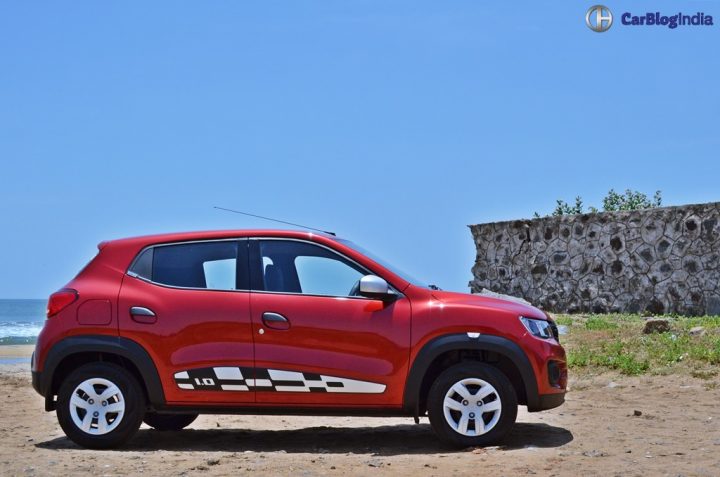 So what do you think of our Renault Kwid 1000cc Test Drive Review? Do let us know via the comments section below.