September 20, 2016: The 2016 Toyota Innova made inroads into India in May 2016. Following its debut at the Auto Expo 2016, the 2016 Innova, which has been christened as the Innova Crysta, went on sale in India. However, it’s only now, after SC lifted ban on 2000cc & above Diesel cars in Delhi-NCR that Toyota has started sales of the new Innova in the National Capital. Prices of the new Crysta start at 13.83 lakh for the base Diesel model (ex-showroom, Mumbai). The new Innova has been fairly quick to become the highest-selling MPV in India. You can check out 2016 Toyota Innova Crysta Price in India, Specifications, Mileage, Features, Video Review and other information here. 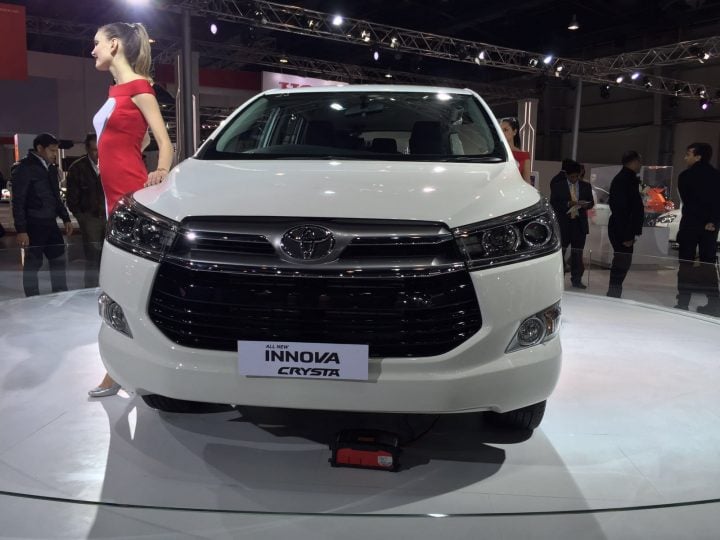 As we just said, the new model 2016 Toyota Innova Crysta India launch took place in early -May. It maybe noted that the Innova is easily among the most successful nameplates in the Indian car industry. Thanks to a really comfortable cabin, ultra reliable engine, car-like dynamics and the reliability that comes associated with a Toyota model, the Innova has already established itself very well in the MPV market. The new 2016 Toyota Innova Crysta successfully carries forward the legacy from the earlier model.

Not just that, the new Innova Crysta goes on to enthral many more prospective buyers with its sportier design, roomier cabin and more features. The front of the new 2016 Innova is more aggressive compared to the 2014 model. It now gets an SUV-like stance at the front with a large windshield, high seating and a large grille. The grille also looks much more masculine now. The headlamps are also less rounded and more boxy with sharp edge styling. The wheel arches are now more subtle and the side profile also gets some changes over the ongoing model. The highlight of the new model’s design is its rear-quarter glass, which surely looks interesting. Also, the introduction of new GD-engine makes the new model more fuel efficient. The new Innova Crysta is a huge step forward and it should go on to change the way people look at mass market MPVs.

In India, the Toyota Innova Crysta Diesel has gone on sale for a starting price of INR 13.96 lakhs (ex-showroom, Delhi) while the top end ZX trim is priced at INR 20.93 lacs. This makes the new Innova considerably more expensive than the outgoing model, but the higher price tag means more space, comfort and more premium features.

Also See – Toyota Innova Cross in the Works? | Why Honda BR-V Could be a Flop

The Toyota Innova Crysta commands a waiting period of up to 2 months at some places. The 2.8 AT Automatic model accounts for nearly half the total sales. TKM now plans to increase the production of the Innova Crysta to 7,800 units to curb the increasing waiting period. The manufacturer produced 6,000 units of the Crysta in June. The Innova Crysta has already managed to overtake the Maruti Vitara Brezza and Hyundai Creta SUVs on the sales charts.

The new model is much more feature rich than the car it replaces. High-end trims get some very premium features that aren’t very common in cars costing less than 20 lakhs. The highlights of the new 2016 Innova’s features list are –

Internationally, the new Toyota Innova Crysta comes with 2 new engines- 2.0-litre, VVT-i, TR Petrol engine and a 2.4-litre GD Diesel. Both these motors offer power & eco driving modes and the new Innova Crysta’s fuel mileage is claimed to be higher than the current model than as much as 15%. Also, the new Innova Crysta will be offered with a 6-speed automatic gearbox with sequential shift and a standard 5-speed manual transmission. The India-spec Diesel engine on duty comes with VNT Intercooler and has a max. power-torque output of 148 BHP-343 Nm. The India-spec Innova also features a 2.8-litre diesel which puts out 174 BHP and 360 Nm mated to a 6-speed AT. Petrol variants of the Innova get a 2.7 litre engine that puts out 166 PS and 245 Nm. 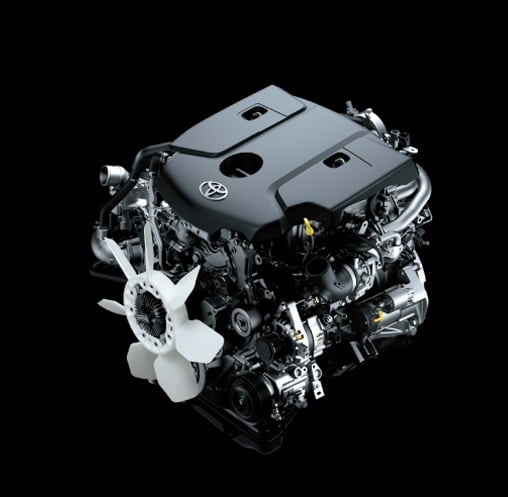 The new Innova Crysta goes on sale in 6 colour options –

The new model Toyota Innova Crysta, when it goes on sale here, rivals the likes of –

Here’s the official advertisement for the new Toyota Innova Crysta

This is the all new Toyota Innova Crysta that has been burdened with carrying the legacy of the Innova brand name forward for another decade or so. Back in 2005 when Toyota decided to launch the Innova in India to replace the Qualis, no one, not even Toyota, would’ve guessed that the car would go on to define the MPV segment in India. For more than a decade, the Innova has ruled the segment despite its age, higher price and other factors. And for good reason. The superior comfort levels, unmatched reliability, and space ensured the Innova cemented itself at the top of the MPV pile. To be quite honest, by the time a genuinely worthy came along, the MPV was too well established to lose out to a fresh face.

Clearly, The new Toyota Innova Crysta has some really big shoes to fill. Toyota has given the 2016 Innova a comprehensive makeover giving it a new exterior, a more opulent cabin and an all-new set of engines including petrol and automatic models. But have they done enough? Will prospective buyers ditch traditional SUVs and executive sedans for the Innova? Will cabbies show it the same amount of love as the outgoing model?

The van-like silhouette of most MPVs is not everyone’s cup of tea and if you’re one of those who do not like that particular body style then the new Innova won’t make your heart skip a beat. That said, the new model here is certainly an improvement over the old one, especially the face. It is much bigger in size, this time around, a fact that is compounded by the sleek headlamps and a wide gaping grille up front. The sleeker headlamps get projector elements and LED DRLs, at least, on the top-end models. Toyota has made ample usage of chrome up front with the twin chrome slats in the grille and chrome inserts in the headlamps. Placement of the turn indicators in the bumpers next to the fog lamps is rather unconventional. 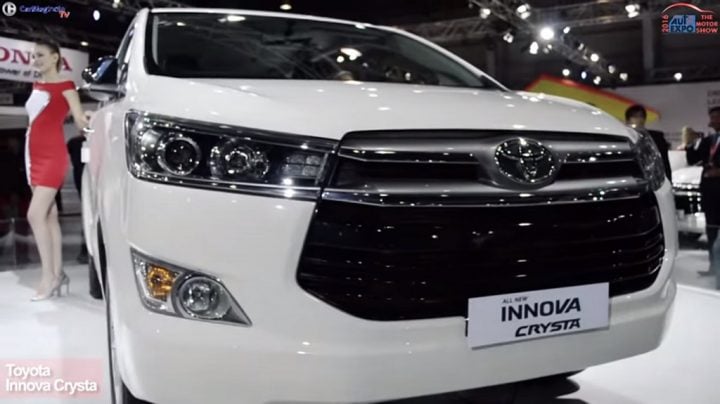 Sadly, though, the designers seem to have exhausted their skills designing the front end as rest of the car is quite disappointing. The van-like side profile is too plain as the body panels are flat and devoid of any strong character lines. And the bulkiness of the body makes even the 17-inch wheels look puny. Out back, the tail lamps sport a very bland profile with odd looking turn indicators. A roof spoiler has been added to infuse some sportiness into the rear, but it just doesn’t impress us as much as the front does. Also, new here is a sharper D-pillar design and new rear quarter glass. 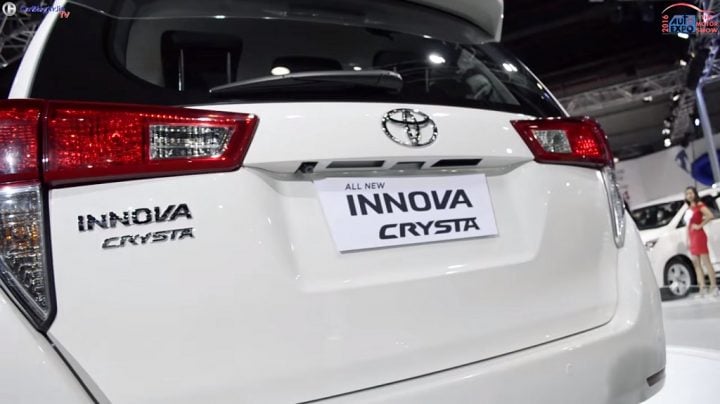 On the inside, major emphasis is given to improved comfort of the occupants. The next generation Innova is sure to come across as being more premium and roomier than before. The Innova Crysta gets features like dual airbags, climate control, reverse camera, multifunction steering wheel. Also, on board is an auto shut function for the tailgate, hill descent control, 6 airbags and more. Taking centre stage in the cabin of the new Innova Crysta is a redesigned dashboard complete with a touch-screen centre console and use of better materials to make the cabin more upmarket. The general design theme is similar to the Corolla’s and the 2016 Fortuner’s. Ample usage of faux wood finish has been made throughout the  dashboard and on the steering wheels as well. 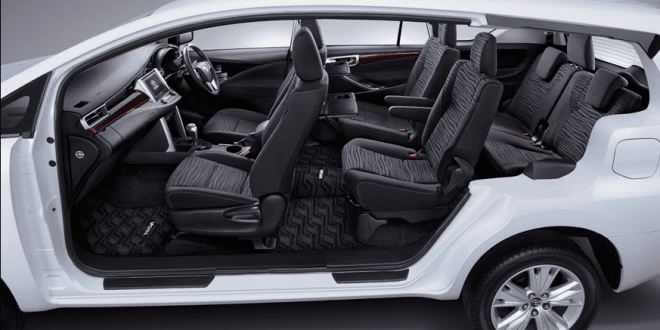 The new 2016 Toyota Innova Crysta boasts a really striking exterior design, has premium features and upholstery on the inside and what is even better is that this model comes with a set of reliable and powerful engines along with the option of an automatic transmission too. But then you would argue that the same applies to the other upcoming MPV’s as well, but what might give the Innova the edge is that it is already an Indian Favourite 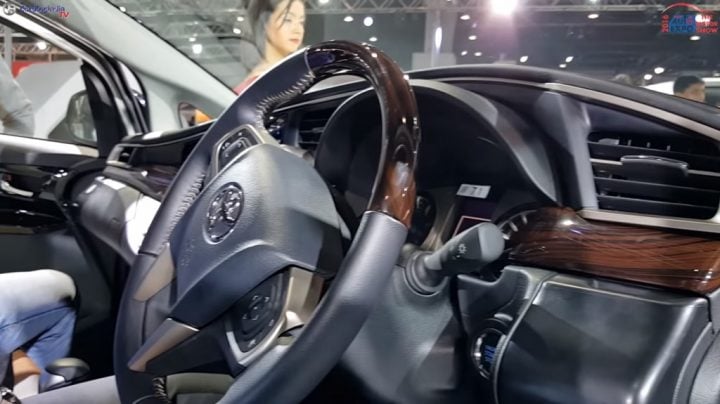 Owing to the fact that it is bigger than the outgoing model, maneuvering the Innova Crysta in city traffic is a more difficult task. A fact that is compounded by the slightly heavy nature of the steering at lower speeds. While the MPV is as comfortable as the old Innova, the low-speed ride seems to be a bit harsh. On the plus side, the new engines and transmissions are a vast improvement over earlier ones. Also, the new car offers more space, more features and much better interiors. Powering the Crysta are all-new petrol and diesel engines that are available with both manual and automatic transmission options.

The motors are potent and are much better in terms of performance as compared to the old car. Stay tuned for a 2016 Toyota Innova Crysta Review.

The new 2016 Toyota Innova Crysta has scored a full 5-star safety rating in the ASEAN NCAP crash tests. The Indonesia-spec model that has been crash tested comes kitted out with safety features such as ESC and Adult Occupation Protection.

The Toyota Innova is easily among the most popular car brands in India today. The Innova still manages to be at the top of the sales chart. The Innova Crysta is expected to build on the last generation model’s qualities of best-in-class passenger comfort, reliable mechanicals, and almost car-like road handling. The new Innova boasts of more premium cabin with many new features, a new set of engines and a more striking face. In comparison to the old model, the new one gets an increase in the power output, the addition of automatic transmission options and additional features as well. However, all this comes at a cost and there is a price difference of around INR 3-4 lacs in the price of the new and old Innova.

The Innova was never really what we would call good value for money and the launch of the new model hasn’t made things better. We compared the old model Innova with the Innova Crysta and you can find our detailed comparison by clicking on Toyota Innova Old vs New Model.