Do you love Ford Figo? If yes, then chances are you will love this story. This story is about the new 2018 Ford Figo facelift which has been spotted testing in India. We even have a photo of it. In the photo, there is little revealed about what the car will look like. What we can say is that it might have a similar grille design as the current car. The car also seems to be wearing body cladding, which you can make out by looking at the lower part of the front bumper. The Figo facelift will probably launch alongside the 2018 Aspire facelift and Figo Cross. 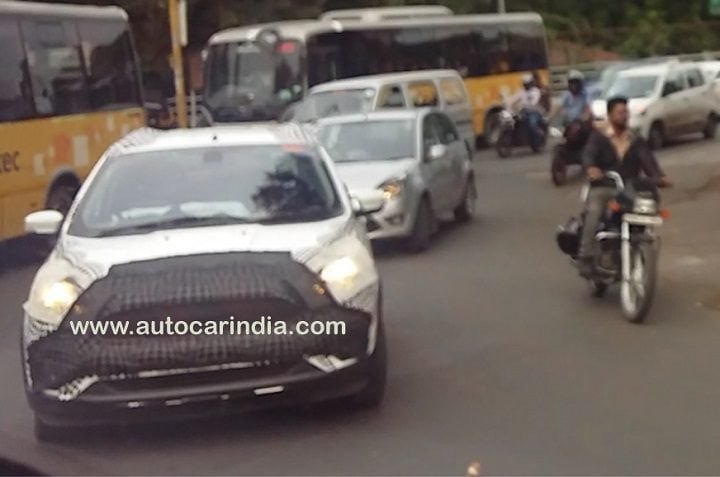 The Figo has not been doing much for Ford India. In the month of July 2017, the Endeavour, which is the flagship product of Ford India, outsold the hatchback. The Endeavour sold 1,030 units in comparison to Figo’s 931 units. Yes, there are other factors such as GST involved in this. However, the Aspire sedan has continually been selling more than the Figo. So, perhaps the time is right to give this hatchback a facelift and a much-needed shot in the arm.

Going by how heavy a camouflage the test car was wearing, expect the facelifted Figo to go on sale in 2018. We think it will be showcased at the Auto Expo 2018, followed by a launch in April 2018.

The new Ford Figo will likely come for a premium over the current car. This is because it will come with new styling elements, features and perhaps a new petrol engine too (from the Dragon engine family). Expect it to have three engines on offer – two petrol and one diesel. Also, it will likely offer a dual-clutch automatic gearbox as an option too.

As per reports, the new 2018 Ford Figo will likely come with three engines. The first of these engines is a 1.2-litre petrol motor which will likely be a three-cylinder unit instead of the four-cylinder one on the current car. This engine’s power and torque outputs are not known yet. We think it will likely have a 5-speed manual gearbox paired with it.

The last engine is a diesel engine that will likely displace 1.5 litres and will be a four-cylinder turbocharged unit. Expect this engine to have a peak power output of 99BHP and peak torque output of 215Nm. This engine will likely come mated to a 5-speed manual gearbox.

The new Ford Figo facelift is likely to come with some new features too. Expect it to sport new bumpers, new alloy wheels and a new set of headlamps (projector units at that). Also likely on the car are LED DRLs, auto headlamps and rain-sensing wipers. Inside, there will likely be a new touchscreen infotainment unit, an A/c vent for the rear seats and 60:40 split rear seats. Do expect to see the new 2018 Ford Figo facelift with a reverse parking camera with display on the infotainment screen.

The new 2018 Ford Figo facelift is currently undergoing testing so most of these details may change later on. However, going by segment standards, these features are more likely than not to find their way on the facelifted car. With this, we come to the end of our piece on the new 2018 Ford Figo facelift. Stay tuned to Car Blog India for the latest news updates on the car.