We, at Car Blog India, have been busy tracking the effect of GST on prices of various cars in India. The recently implemented Goods and Service Tax (GST) enables the Government of India to have a uniform tax structure throughout the country. The effect of GST on car prices in India is largely positive. Most of the cars have got cheaper to some extent. While many luxury cars have seen considerable price drops, even some popular mass market models have got cheaper. One such car is the Honda City. Honda Cars India is passing on the entire benefit of GST to new customers. Hence, the City is now cheaper by up to ₹ 16,000 in New Delhi. This price difference swells upto ₹ 28,000 in some states. Here, in this post, we have good look at the Honda City price after GST. 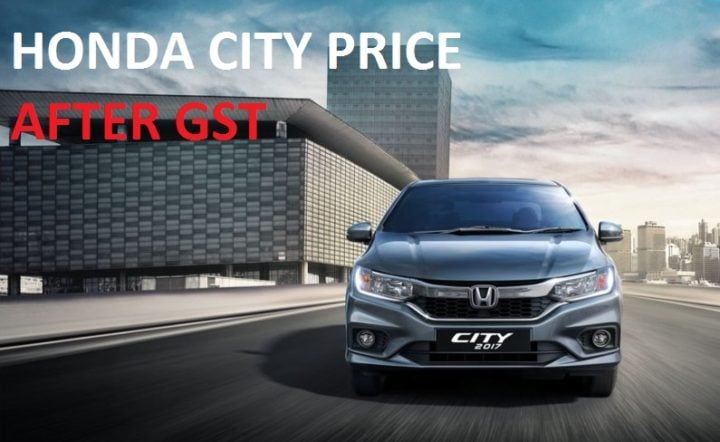 The latest-generation Honda City, which got a facelift earlier this year, is on sale in both Petrol and Diesel models. The entry-level Honda City price after GST is now Rs 8.46 lakh. The fully loaded Honda City costs Rs 13.43 lakh after GST implementation. All prices here are ex-showroom, New Delhi.

As can be seen above, thanks to GST, prices of certain models have gone down by up to ₹ 16,000. In certain states like Maharashtra, where VAT has been subsumed, the Honda City price after GST has dropped by up to ₹ 28,000. It may be noted that the latest City has always been criticized for being over-expensive. The price cut due to GST implementation helps reduce the price by a small margin, thereby making this car slightly better value.

Seen above are some images of the 2017 Honda City facelift from its launch event.